In 2013, a significant gap was identified in the percentage of people who wear their seat belts in urban areas (85%) of Utah compared to some rural areas (55%). Since vehicle crashes are a leading cause of death and serious injury in the United States, and seat belts are a proven effective lifesaving mechanism in those crashes, the Highway Safety Office of the Utah Department of Public Safety engaged the Center for Health and Safety Culture in 2012 to look into the factors that were contributing to the sizable gap in seat belt use between urban and rural areas. Why were people in rural areas less likely to wear their seat belts? And, how could Utah encourage its rural residents to protect themselves and their loved ones by wearing a seat belt? (It is important to note this is not a unique phenomenon to Utah; lower seat belt use is common in other rural areas across the country.) 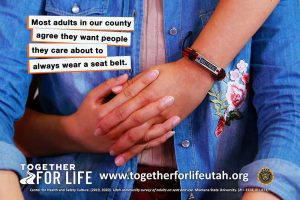 Initially, three rural counties with the lowest seat belt use rates in Utah were selected to pilot a behavior change project focused on increasing seat belt use by means other than enforcement. This pilot project was a cultural approach to improve health and safety within the three counties with research and strategies implemented across the social ecology reaching law enforcement, workplaces, key leaders, community members, students, and school staff. The Center applied the Positive Culture Framework as a way to understand, measure, and create messaging to promote the shared positive beliefs about wearing seat belts that were found to be prevalent among the rural residents.

The theme “Together for Life” was chosen for the pilot project based on the data that most Utah adults want the people they care about to always wear a seat belt. It connects people on their shared value of protecting the people they care about by always wearing a seat belt themselves and by asking others to always wear their seat belt. The Together for Life pilot project included tools and resources (toolkits and media: video, radio, and print) to support coordinators working with law enforcement, workplaces, key leaders, community members, students, and school staff.

In the traffic safety field, promoting seat belt use is typically approached with individual-focused strategies, but the Together for Life project was a comprehensive effort that generated notable community involvement in promoting seat belt use. Traffic safety leaders in Utah were encouraged by the positive and hopeful approach this project embraced while including strategies across the social ecology, which was a fresh and innovative approach for a traffic safety project. By 2016, a second cohort of four additional counties was added to the Together for Life project efforts as well as a guide from the Center who would coach and support the coordinators along their journey implementing the Together for Life project. Now seven rural counties were using the tools and resources created to promote seat belt use and people being “together for life” by asking other important people in their lives to always wear their seat belts. Also during this time, in 2015, Utah state legislature passed a secondary seat belt law in addition to their primary seat belt enforcement law, another achievement in increasing seat belt use.

The Center continued to guide and support Utah county coordinators through their work with their coalitions and communities. Feedback from coordinators throughout the project revealed that they valued having tools and resources to engage people in various sectors and in different ways than the standard go-to billboard or mock car crash. Observed seat belt use in the seven pilot counties increased by an average of 20% from 2012 to 2019. And, when beliefs and behaviors were reassessed in 2019, analyses showed that changes in adult beliefs and behaviors were particularly more notable among those who had seen or heard the “Together for Life” media. 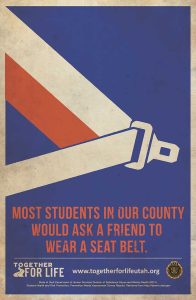 The Highway Safety Office of the Utah Department of Public Safety is carrying on the positive Together for Life project efforts in the seven pilot counties and now in a third cohort of two additional rural counties where seat belt use rates have been identified of needing improvement. The Center is currently expanding the Together for Life toolkits, media, and website and continues to explore ways to reach the very small number of Utahns who still do not use a seat belt. 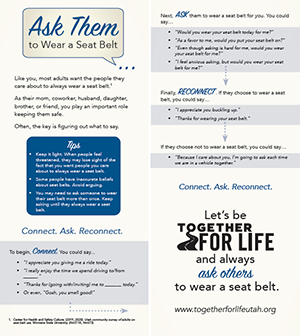 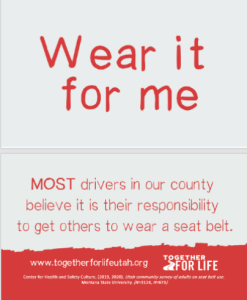 Click here to view the Together for Life website and a complete listing of media and tools created for this project.

Together for Life Project Cohort 3

The Center for Health and Safety culture will continue work on the Together for Life Project – a project to increase seatbelt use in rural Utah based on the Center’s Positive Culture Framework. The Center has worked with 7 rural counties over the past several years and will continue to provide support, media, and evaluation […]

The Highway Safety Office of the Department of Public Safety for the State of Utah and the Center for Health and Safety Culture engaged in a project to address the significant disparities that exist between urban and rural rates of seat belt use among citizens of Utah.  This project sought to improve rural traffic safety […]

The Center for Health and Safety Culture and the UT Highway Safety Office sought to improve rural traffic safety and reduce injuries, and fatal car crashes with this project by utilizing the Positive Community Norms framework across the social ecology to transform the driving culture. Throughout this multi-year project, the Center provided trainings on the […]